Posted at 15:33h in FTA by Melanie Gibbons
0 Likes 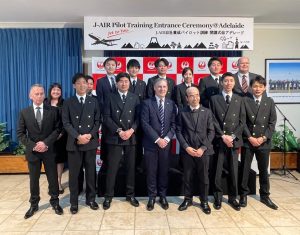 On Tuesday the 31st of May the official relaunch of the J-AIR pilot cadet program was conducted at Flight Training Adelaide (FTA). The day started with a visit to the South Australian Parliament where some cadets and J-AIR delegates had the chance to meet The Honorable Mr. Nick Champion MP, South Australia’s Minister for Investment and Trade, as well as The Honorable Mr. Peter Malinauskas MP, Premier of South Australia. 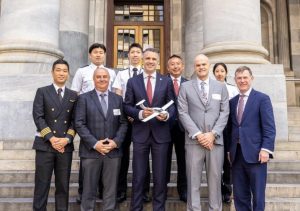 In the afternoon an official ceremony was hosted at FTA which was attended by a number of distinguished guests including Senior Management from J-AIR and JAL, representatives from the South Australian Government as well as delegates from the Japanese Embassy in Australia.

FTA would like to thank all guests for their attendance and continued support.

The Honourable Company of Air Pilots

FTA is very proud to announce that its Parafield Movember team raised $2,120. Dave Toy, FTA Parafield’s COO commented, “I would like to thank everyone that participated and, more importantly, made a donation for this wonderful cause.  The services that Movember support for both men’s…

FTA is extremely proud to now have over 100 graduates from the IndiGo cadet program being inducted into the airline.   On achieving this significant milestone, Dave Toy, FTA Parafield’s COO, commented “Achieving over 100 FTA graduates inducted into IndiGo is an incredible result, especially…

This website uses cookies to improve your experience while you navigate through the website. Out of these cookies, the cookies that are categorized as necessary are stored on your browser as they are essential for the working of basic functionalities of the website. We also use third-party cookies that help us analyze and understand how you use this website. These cookies will be stored in your browser only with your consent. You also have the option to opt-out of these cookies. But opting out of some of these cookies may have an effect on your browsing experience.
Necessary Always Enabled
Necessary cookies are absolutely essential for the website to function properly. This category only includes cookies that ensures basic functionalities and security features of the website. These cookies do not store any personal information.
Non-necessary
Any cookies that may not be particularly necessary for the website to function and is used specifically to collect user personal data via analytics, ads, other embedded contents are termed as non-necessary cookies. It is mandatory to procure user consent prior to running these cookies on your website.
SAVE & ACCEPT
Course BrochuresEnquire Now